Enjoy a private guided tour along the main streets of Palermo by Fiat 500. Starting from Piazza Politeama (Politeama Square) but we can change the meeting point according to your personal requests.

We stop in Piazza G. Verdi where stands the largest theatre of Europe:

the Theatre Massimo, then we proceed to the Norman Palace and the Palatine Chapel. The tour will continue to the Zisa, a 12th century palace constructed towards the end of the Norman reign 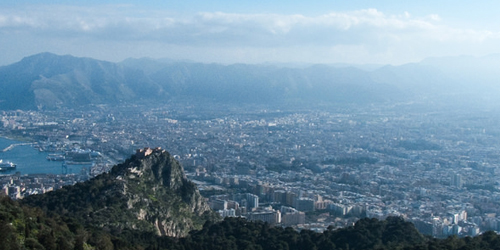 Enjoy a chauffeured tour from the Piazza G. Verdi through the ancient port of Palermo said the Cala, now restored and full of swish yacht, passing from to the Foro Italico, city’s seafront. There will also be pit stops along the way to take photos. Then proceeding to the Monte Pellegrino, the high mountain where stands the sanctuary of Saint Rosalia, also called La Santuzza or “The Little Saint”, the patron saint of Palermo.

You can visit the sanctuary, located inside a cave and contains the bones ofSanta Rosalia and many votive offerings of the faithful devotees of the saint, whose bones, according to tradition, had been found on the mountain by a hunter in 1624 while the plague scourged the city.

According to tradition, thanks to the discovery, the plague was defeated and the Senate of Palermo he dedicated the shrine. 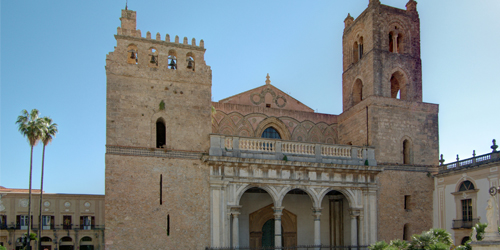 Starting from the city centre to discover the wonders of Monreale. Upon your arrival, wit, you will visit the Duomo of Monreale, which made up part of a complex self-contained fort which contained also the Royal Palace, the Abbey and the Bishops.

The Cathedral of Monreale was built in 1174 by William II and within you will find breathtaking golden mosaics that depict scenes from both the Old and New Testaments. Beside the cathedral is the abbey cloister, built around the same time as the church and expanded in the 1300s.

The tour include a stop to enjoy the Sicilian ice-cream!

Starting from the city centre to discover Mondello. Enjoy the tour by Fiat 500 along the Parco della Favorita, which represents the biggest green area of Palermo. It is located at the foot of Monte Pellegrino, in the north-western part of the city. You’ll explore the long sandy bay of Mondello.

There will also be pit stops along the way to take photos and to taste fresh fish in one of the best typical trattoria. 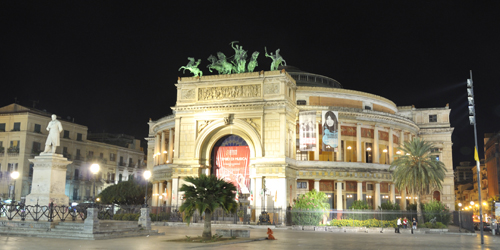 Enjoy the Top 10 fun things to do in Palermo! You will discover the most amazing places of the city by night.
Seats: 3 Seats to car Duration: 4 Hours

Tour of the coast

Departure from Palermo to Bagheria to visit Villa Palagonia, a patrician villa and one of the earliest examples of Sicilian Baroque. Its popularity comes mainly from the statues of monsters with human faces that decorate its garden and its wall, and earned it the nickname of “The Villa of Monsters” (Villa dei Mostri ).

The next stop will be Solunto, an ancient city situated on the north coast.

You will visit the Antiquarium of Solunto, a museum located inside the archaeological site of Solunto.

Then you can enjoy diving  or an excursion on boat following a good aperitif in a sea view terrace.